Métis Community and My Heritage

Our family is both Québécois and Métis (Michigamea/Kaskaskia). The family name Malette, in my lineage, originates from Bretagne (Breizh), the region of St-Malo (Bro-Sant-Maloù). Our Métis roots go back to the fur trader communities of the Bois-Brûlé people, evolving in the Great Lakes area that stretches between Montréal, Michilimakinac, Détroit, and Kaskakias (au “pays des Illinois”).

I have French-Canadian Métis heritage (and Native ancestry) from both my mother’s (Pierre Chabot and Symphorose Mar8t8é8é) and father’s (Michel Bisaillon & Marie Akensamac8a) side of the family, originating from the Matchigamias territories and old Canayen and Métis community of Kaskaskia, which is located in the American Midwest. We are the descendants of French Métis and fur trade families from the Midwest, including the Malette, the Bizaillon, the Chevalier, the Chabot, the Deschamps, the Chales and the Campeau, among others.

Our family has many relations, and cousins, East and West. For example, the line of my great-great uncle, René, via Gabriel Malette, leads to Joseph Malette, who married Marguerite Bourbon Maskegone from the region of Red River.  Malette’s descendants married into the Chartrand, Ducharme, Monet dit Belhumeur, and the Breland families, among others. I have also Acadian relations, connecting our family to the lines of Pitre, Terriot, Boudreau, Savoie, Lejeune, and Melançon.

The historical community of Kaskaskia is reputed for its significant Métis and French population. Kaskaskia was a bi-cultural mix of agrarian (Indigenous peoples were already cultivating land in that region), buffalo, and fur trade-based economy in relation to St-Louis. Similar to the French Métis and Canayen community of Red River, but established almost 100 years prior,  Kaskaskia and Cahokia saw Indigenous women predominantly marrying French-Canadian men, and adopting Christianity (often “lived-Catholicism“) as their main religion through these unions, with the result of producing a unique culture– neither European or First Nations– infusing the North American continent and its spreading fur trade and commercial networks.

Again, we ought to remember that the Red River Métis went through a very similar process, only at a later date: the Indigenous women marrying Canadien also predominantly adopted Christianity, and many métis families of Red River also practiced agriculture, in addition of other occupations. But unlike the practice in the scrip system later in Red River and the North-West, the Catholic missionaries in Kaskaskia recorded the names of many Indigenous women, which allows us today to honor their memory as a vibrant part of our French-Canadian Métis heritage. Members of Muskrat French Métis community thus cherish the memories of Indigenous women who are part of their heritage, such as Marie Rouensa-8cate8a (daughter of the Chief Rouensa of the Kaskaskia nation), Simpharose Mar8tp8e8e, Marie Asamsamac8a, Suzanne Capi8ek8e, Anne Alimacoua, Domithilde Choupingouata, Marguerite Ouassaiamoussé, Symphorose Tapokoe, and many others.

Interestingly, the Métis settlement of Kaskaskia is already recognized by L. J. Barkwell, L. Dorion and D. Préfontaine, historians for the Gabriel Dumont Institute, as part of the “Métis Homeland: its Settlement and Communities.”

It should be noted that Father Tartarin in 1738 uses the ethnonym “Métif,” in Kaskaskia, to describe its mixed population, even labelling as “good Métif” the children born out of Christian marriages.  French Naval Captain Bossu also identifies the inhabitants born from the union of French and “Sauvages” as the “Métifs,” in the area that constitutes Haute-Louisiane, and not “Créole,” by which he identifies those who are born of European-descent parents only, but who are themselves born in America. 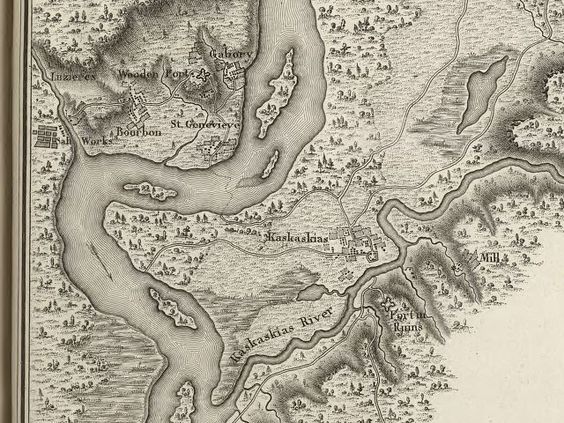 As an interesting anecdote showing the significance of early alliances, I descend from coureur des bois Michel Bizaillon and his Native wife Marie Akensamac8a (among other Native ancestry), who is known as having brought hundreds of Illinois warriors and allied nations in 1715 to rescue Detroit from an attack by the Fox nation (Outagamis) and their allies. Their attack on Detroit most probably impacted the Great Peace of Montreal of 1701, signed by the Fox representatives Noro and Miskouensa.

Bizaillon leading 400 warriors to defend Détroit against the Fox. 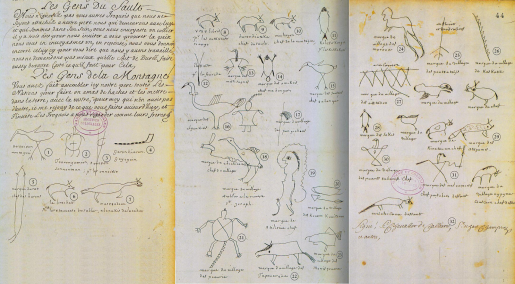 The signature of the Kaskaskia is 26. The Great Peace of Montréal 1701.

The Malette family name (Mallet, Maillet) is, moreover, associated with the founder of a Midwest settlement known as Maillettown, described by Louise Seymour Houghton in her book Our Debt to the Red Man. The French-Indian in the Development of the United States (1918) as a “métis village,” reported as being inhabited only by Métis men, who, when learning from Paulette Maillet of the capture of one of their own by the British, went to rescue their fellow before retreating to Cahokia.

Old Métis and Canayen settlements such as Maillettown, and other settlements originally situated in the “Pays des Illinois,” were eventually affected by colonial wars and incoming settlers in ever greater numbers. Many of the Métis families from the Midwest, the southern Great Lakes, and Detroit areas moved to the East, North, and West. A number of Half-Breed tracts (reservations) were created along the Mississippi, adjacent to Illinois, in Missouri, further north to Lake Pepin (part of the 1830 Treaty of Prairie du Chien). The Métis from La Pointe also signed the 1847 Treaty of Fond du Lac, including the Cadotte, Roy, Sayer, and Corbin.

Many Métis families from the Midwest also went back to Québec or Ontario, such as the Lesage (i.e. the famous root Métis family of Steve and Roddy Powley, who won the first constitutional case in Canada for Métis rights in 2003). The Powley family (through the Lesage Métis line) is a great example of the mobility, memory, and resilience of the Midwest Métis families. Originally from La Pointe, we find the descendants of the Lesage line living in Detroit, and then Sault-Ste-Marie (Ontario, Canada). 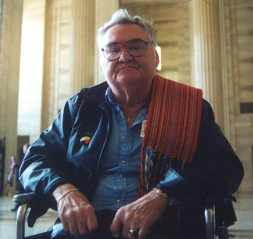 Despite the fact that no one in the Powley line intermarried with other Métis lines, and that the Métis community of Sault-Ste Marie was reputed extinct by 1870 (per Court records), the Powleys nevertheless kept the memory of their Métis heritage within their family; a cultural memory which we often find in many French Canadian Métis families, despite the assumption of their assimilation either by “Indian” or “White” communities.

The same pride for their culture can be found in many “French-Canadian Métis” families (a term used by Louis Riel to identify his people) in the historical Detroit and Lake St-Claire areas, including among the Métis “Muskrat French” people. The Muskrat French culture is associated with the Detroit River region Indian fur trade culture (among others), in which many Muskrat French families originate. Families associated with the fur trade were part of kinship networks that often had members in historical towns and communities throughout the Great Lakes region and the American Midwest, such as in Green Bay, Cahokia, Kaskaskia, St. Ignace, Michilimackinac, as well as Detroit.

In 1879, Havard reports that the “French” inhabitants of Detroit region and the Illinois settlements imbued with Indian blood had lost their “White race” status. Their pride in their Indigenous heritage is also signaled. 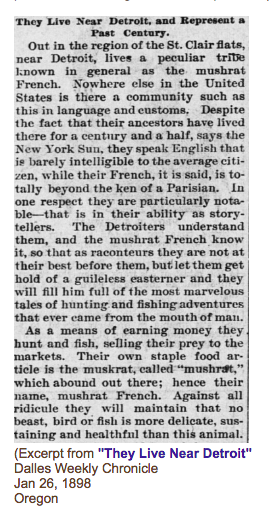 In 1898, the “mushrat French” are referred to as a “tribe.” They are collectively and distinctively identified as different from other Detroiters, with a distinct culture of their own.

Many families of Métis Muskrat French heritage have joined the Voyageur Métis; a grassroots community that promotes cultural advocacy on behalf of the Métis Muskrat French from an independent and community-based perspective. Due to their central geographical location below the Great Lakes, between the East and the West, some of the Muskrat French families have kinship connections both to the historic Eastern and/or Western Métis families; for example, the Director of the Voyageur Métis Anne Anderson is the 3rd grand niece of Red River Métis leader Cuthbert Grant Jr and also has fur trade Cree ancestry. I currently volunteer as Chairman of the Voyageur Métis.

The “French Muskrat” Métis families from the Midwest thus have a rich and unique history in North America. As evidence of this history, the culture of the Midwest and Great Lakes Métis has been described collectively and distinctively as “Mitchif” by Father Tartarin, “Métis” by Havard in 1898, as well as “Métis” by Louise Seymour Houghton in 1918 (and not “Créole”). The origins of this culture are fur trade-based, and exhibit the same ethnocultural markers as other Métis communities across North America, including language (Mitchif-French), religion (Catholicism), intermediary positions (traders, war chiefs, diplomats), cultural stigma linked with their rejection of the official Indian-ness, and with French-Canadian and Indigenous kinship at its base. The Muskrat French Métis, who descend from the Métis of the Midwest, have thus formed a unique culture, underscored by historical descriptions using collective ethnonyms such as “Métis,” “Mitchif,” and “Bois-Brulé,” and even the term “tribe,” setting them apart from euro-descendant Detroiters or “White” settlers of that region, by reference to their indigeneity.

That been said, being a French-Canadian Métis today far exceeds any restrictive views that would make this identity only contingent on tracing oneself to any given historical settlement, or some root-ancestors, or some grand nationalist narrative supposed to confirm our existence as people. To be clear, ideas of nationhood can be helpful (such as the Northwest Métis nation, the Red Sky Nation of the NWT Métis Nation), but they can also be dangerous when exercised to diminish the identity of Métis who express their relationship to their heritage differently. A balanced, nuanced and respectful approach to Métis diversity should therefore guide our views on Métis nationalism.

To me, Métis identity expresses the sum of all relations that makes our family part of a unique diaspora, culture and people. As part of this culture, I value my kinship relations and the Land from which my culture sprung. Many Métis congregate and recognize one another through similar values. It’s simple, really, although there are some who still feel ashamed of their heritage for fear of being ridicule or persecuted as not good enough, wannabe, too French, too Indigenous, or an ethnic fraud. It still takes courage to claim a Métis identity. Some of us may not have  special rights due to our identity, treaties or given territories to reside on as Métis, but I believe the memories that we must honor both our fathers and mothers in declaring ourselves Métis, as Louis Riel suggests we do, still rings true for many of us.